Aristotle once said that man is part of four frameworks: family, village, country, and all humanity. Indeed, we are part of a common human story of development and complexity, built upon the unique history and contribution of each nation and Civilization to the common human heritage. Bulgaria plays an important part in the development of Western Civilization for several reasons:

First – Bulgaria is the cradle of human Civilization; it is one of the first countries in the world where villages and homes were built, and people moved to agriculture instead of being hunters and gatherers. Advanced prehistoric Stone Age Civilizations were found in Bulgaria. And the characteristic of them was that they were matriarchal peaceful societies – the great mother guided the Bulgarians More than 8,000 years ago, it taught them how to produce advanced pottery, develop the arts and crafts, manage society and cherish values of responsibility, paying attention and awareness. For thousands of years there has been a human gold era in Bulgaria that is introduced by women priests who encouraged the sacred work, nature, fertility and sexuality, music and dance, and connection to the worlds beyond.

The first chapters in the part on ancient Civilizations will be devoted to this wonderful period in human history (which also appears elsewhere in the Balkans), and will tell about some of the sites related to this period

The ancient Bulgarian Goddess Civilizations evolved into developed Civilizations that were the first in the world to produce gold and metals, and so, already 6,000 years ago, wonderful findings such as the Varna Golden Treasury were found in Bulgaria, as well as many copper objects.

One of the things that distinguishes the ancient period is the sanctification of special stones in nature, caves and Mountain peaks, and the establishment of the so -called “Megalithic sites” (large stone), starting with the Chalcolithic period (6,000 years ago). Many of us have heard of the UK’s stone circles, the Dolmens and Menhirs (standing stones) in France, but not many people know that in Bulgaria one finds the equivalent of all this and more.

You might be surprised to hear that in Bulgaria there is an amazing network of Megalithic sites that are unfamiliar to the general public. In ancient times people could feel the energies of the earth and knew how to enhance it through the establishment of impressive monuments at specific places. This created in Bulgaria an unparalleled network of power places. These are sacred sites of holiness and beauty where one can connect to the universe and oneself.

With the beginning of history, from the 3rd millennium BC, Indian European people and tribes started migrating and settling in Bulgaria. They mingled with the local population and created the Thracian Civilizations. Bulgaria is home of the Thracian people, and all Bulgarian will swear to you that they are descendants of the ancient Thracians. Until recently, historians thought the Thracians were underdeveloped society, like the Celts in the rest of Europe; but in the last 40 years findings have been discovered that show the Thracians had advanced technology and spirituality, which I will tell about in the book.

The first part of the book covers a span of 6,000 years of history, from the beginning of the establishment of villages and the appearance of the Goddess culture 8,000 years ago, to the Roman era. many of the sites that relate to this period are literally unknown to the general public.

In the introduction to this part I will relate to the special feature of man and that is his intrinsic religiosity, belief in the world beyond and forces that are greater than him. My understanding is that history is also the history of the human quest, an ongoing human search for meaning. We are all part of a common human journey towards enlightenment and spiritual development. In this context, I will also bring spiritual alternative theories that are relevant to understanding the the sacred places of Bulgaria and their inner nature. 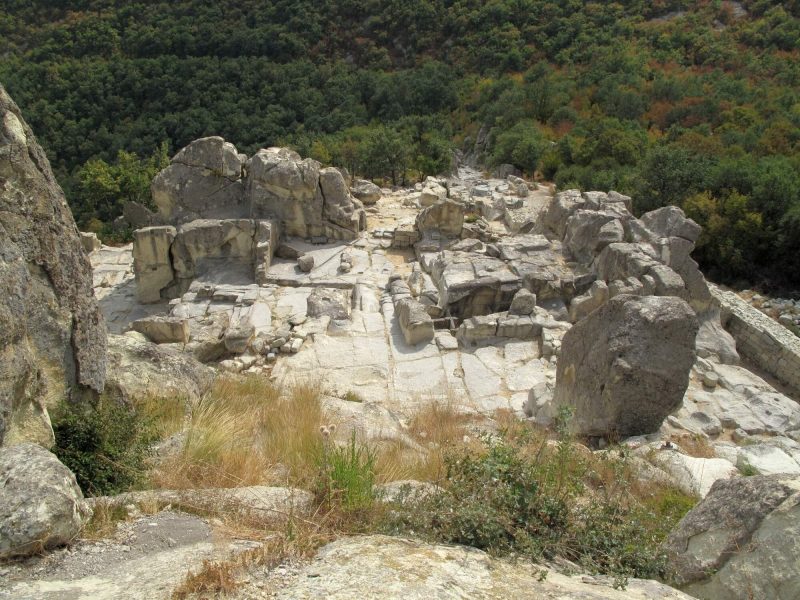 For comprehensive Introduction to the Subjects above read the following Articles:

The route I suggest following the sites of ancient Bulgaria is circular and passes through the important Mountain areas of this beautiful country. It begins in the energetic centers of the Rila Mountains, the beating heart of Bulgaria, the place of the Seven Lakes, the Musala Peak and Marko Gate, continues to the eastern Balkans, the northeastern corner of Bulgaria, where the Magura Cave with the oldest rock paintings in Europe is located, as well as a mysterious sand hill area called Belogradchik. After that we reach the sites north of the Balkan Mountains; The Cave of God’s Eyes, Sveshtari tomb, and cross the Mountains back to the Thracian Valley of the Kings to the sites of Starosel, Kazanlak, Buzovgrad, Slivan and Karnovo. From there we continue to the coastal areas of Bulgaria and the ancient sites in the area of Varna, Burgas and Sozopol, to the Megalithic complex of Bagliktash which is perhaps the most impressive in Bulgaria. From there the road goes up to the unknown and beautiful area of the Strandja Mountains, Bastet rock, the Mishkova Niva Temple and a nearby unknown area of the Sakar Mountains, where the most impressive Dolmens in the Balkans were discovered.

From there we move on to the magnificent Rhodopes, the sacred Mountains of the Thracians and their predecessors. We start in east Rhodope, where there are massive Megalithic complexes, like Perperikon and Tatul, the Deaf Stones, Herman Kaya, and also the Thracian temples in Alexandrovo and Mezek, as well as the only stone circle in Bulgaria near the beautiful gorge of the Arda River, mysterious niches carved into the cliffs, and vagina-shaped caves. From there we continue to the area of canyons and Mountains in the center and western Rhodope, where we will find wonderful sites in hidden places in the Mountains such as Yagodina Canyon, Trigrad canyon, Goat rock, Gradishte and Belintash. From the Rhodope Mountains we will descend to Plovdiv, which is considered the oldest City in Europe, and finish in Sofia, at the National Museum which nicely sums up the trip and the theme of Bulgaria’s ancient cultures.

If we list it by name, then these are the main sites that make up the route and on which it is recommended to focus: the Seven Lakes, Musala Mountain, Markos gate in the Rila Mountains, Popovo lake in the Pirin Mountains, the Belogradchik hills, the Magura cave, the Lepenitsa cave, Vratsa, the Cave of God’s eyes, the Thracian tomb and Megalithic walls in Shveshtari, Thracian tombs and Museum in Kazalank, Thracian tomb in Starosel, the Gate of the Earth in Buzovgrad, the mound of Karanovo, Varna, a Megalithic site in Begliktash, Bastet Temple in the Strandja Mountains, mishkova Niva Temple, Dolmens in the Sakar Mountains, Thracian tomb in Alexandrovo, Mezek’s Tomb, the deaf Stones, the dolni Glavanak stone circle, the Temple of Dionysus and the ancient City of Perperikon, the Tatul site, the Harman Kaya observatory, the astronomical observatory and the Rock of Knowledge in Belintash, the Trigard and Yagodina canyons, the rock face in Gradishte, the Goat’s Rock, the seven hills of Plovdiv, Museums in Sofia. You can read about all this sites in the following chapters.

During the route you will have a chance to see reconstructions of ancient villages from the times of the beginning of Civilization, and especially the network of the sacred sites all over Bulgaria, most of which are of a Megalithic nature, located in unusual places in nature. These are places that were designed and shaped by our ancestors from the Goddess times – stone circles, standing stones, Dolmens, sun gates, star observatories, and more. It is possible that the reason for the huge effort put into creating this network of sacred sites lies in some perception of the earth as a living being and a feeling of earth energies. Bulgaria has many wonderful Megalithic complexes, such as Begliktash and Belintash, which are not known to the general public. At the same time, they do not fall in beauty and drama from Stonehenge in England or the Megalithic complexes of France.

The route combines this network of prehistoric sites from the times of the  Goddess es with sites from the Thracian period, that began to be discovered starting in the 80’s of the last century under the leadership of the Bulgarian “Indiana Jones” – Archaeologist Georgi Kitov .The Thracians sanctified the ancient Megalithic sites and in addition, established a network of burial temples all over Bulgaria, impressive monuments that do not fall short of the other temples of the ancient world in their size and beauty. This is an unknown and important chapter in the shared human heritage.

The route following ancient sites is flexible and not a fixed route. In the chapters ahead you can read about some of the most important and beautiful Thracian and Goddess culture sites, Megaliths and temples in Bulgaria. For your convenience I have arranged them in a certain geographical order and this is where the idea of a route comes in. however, you can visit the sites of your choice and make your own route, as each site stands on its own.

Read about the interesting Sites of the Ancient Civilizations of Bulgaria in the following Articles:

The heart of Bulgaria is the Thracian plain, trapped between the Balkan Mountain range to the north and the Rhodope Mountains to the south. It was one of the most important granaries of the Roman Empire, a rich agricultural area the size of the State of Israel, where the major cities are located – Sofia at the end and Plovdiv in the heart. At its western end lies the port of Burgas and the coastline of the Black Sea.

Northern Bulgaria is another rich agricultural area of plains and hills about 100 km wide, which slopes down from the peaks of the Balkan Mountains to the Danube River. There are interesting and important historical sites in the area, but today it is quite remote. In contrast, the Black Sea coast has become a popular resort for tourist in recent years, in its center are the cities of Varna and Burgas.

But in my humble opinion, the more interesting areas in Bulgaria are the Mountain ranges. Bulgaria has five towering Mountain ranges, each of which is a separate cultural and scenic area. Each of them has different costumes, Folklore, music and dance, historical tradition and local pride. The biggest and most different of all is the Rhodope Mountain range, which separates Bulgaria from Greece; The longest and most inhabited of them is the Balkan Mountain range called the ‘Good Mountain’ (or the ‘Old’), around which nationalism and culture developed. The highest and most impressive in terms of scenery are the Rila and Pirin Mountains, which reach heights of 3,000 meters; Near Sofia there is a small Mountain range called Vitosha, but it rises to a height of 2,200 meters and serves as the green lung of the City. These are the five well-known Mountain ranges, and to them must be added the beautiful Strandja and Sakar Mountains, located in the southeast on the border with Turkey.