Origin of Men Mystery in Bulgaria

Appearance of the Homo Sapiens in Bulgaria

It is common to think that the first appearance of a developed Homo Sapiens in Europe is the Cro-Magnon men that appeared in southwestern France around 35,000 years ago. Traces of the new type of human being, that soon enough inherited the earth, are frond around the Pyrenees and the Bay of Biscay. From there Cro-Magnon men migrated to the rest of Europe, North Africa and the Middle East. The Cro-Magnon men left us beautiful cave paintings, which indicate advanced and sophisticated culture, with great knowledge in anatomy and the natural worlds and a deep religious belief.

According to the archaeological remains, historians believe that the people of the Cro-Magnon have treated their sick and wounded with care, and that their relationships was characterized by mutual help and brotherhood, they had deep religious beliefs that were expressed in the burial customs. They were hunters and gatherers, that were organized in groups of around 20 people in extended family units. They knew how to weave baskets, and cloths from linen, how to produce and use sophisticated stone tools. They knew how to produce colors, jewelry, and they might even have had a lunar calendar.

However, the last findings from Bulgaria suggest that the Balkans were the place where Homo Sapiens first appeared in Europe and not southern France. In the Magura Cave next to Belogradchik, remains of a Homo Sapiens from 40,000 years ago were found, and also in Bacho Kiro cave next to the Dryanovo Monastery in the northern Balkan Mountains (The Homo Sapiens in this case were mixed with other kinds of human beings, so the findings are inconclusive). Remains of Homo Sapiens were also found in the Peștera caves in Romania, from the other side of the Bulgarian Danube, as well as in the Kozarnika Cave which is also near Belogradchik[1]. 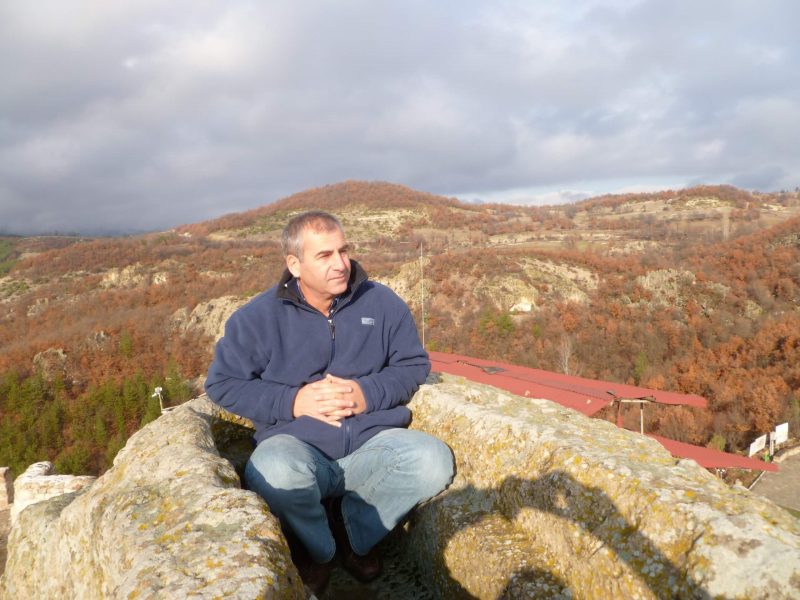 One of the characteristics of the Homo Sapiens who inhabited Europe starting from 40,000 years ago is the appearance of wonderful cave paintings over a long span of time, from 30,000 BC to 9,000 BC, it is “an amazing unity of artistic content.”

The motifs of the paintings their and location imply that they were made for religious purposes. They were painted in inner halls of the caves, far away from the entrance, which were a kind of temples. The most famous finding is the paintings in the Lascaux Cave in southern France (from 18,000 years ago) of bulls, horses, human figures and other animals. In other caves, scenes of dancers, shamans and humans engaging in ritual activities were discovered.

The paintings indicate high artistic ability, but according to the interpretation of some researchers, they also represent developed spirituality. Dr. Michael Rappenglück from the University of Munich claims that the points in paintings along with the figurative images represent star systems such as the Pleiades star cluster. That the bison in the paintings represents the female and the horse represents the male: “When you decipher things in light of this symbolism, the cave turns out to be an incredibly organized and meaningful world.”

Horst Kirzner offers interesting interpretation to one of the paintings in the Lascaux Cave. The bison turns his horns at a man lying on the ground that looks like dead, but actually goes by an initiation process that the animal symbolizes.

What is the importance of these findings?

The importance is that they are evidence of ancient and advanced culture and spirituality of the Cro-Magnon men. It is important to note in this context that the cave symbolized the uterus of mother earth. The caves have a special atmosphere, especially in those with stalactites, narrow transitions, halls and running water that implies life’s renewal. The halls with the paintings were found to have special acoustic qualities. Man made these special caves into temples and painted his beliefs on their walls.

The appearance of God

The new Cro-Magnon men who appeared in Europe was a religious person, but not in the sense of the usual and institutionalized religion, but in the sense of “feeling part of something greater than oneself, of creation” and the recognition of the existence of worlds beyond. Religion was part of his essence, understanding, way of going on. It is difficult to perceive this in a world like ours that strives for secularism, but belief in a force that is outside the human and aims at good was part of the new Cro-Magnon men life.

Homo Sapiens believed in the existence of other worlds, spiritual beings, energies, soul and spirit, life after death, and meaning to life. This can be seen in the remains they left behind, burials, temples, art. The ancient remains that humans have left behind are an expression, among other things, of their beliefs. Religion is not an intellectual invention that has occurred at some point in history, but a fundamental part of one’s character like art or music. This is why it also appears in primitive societies that have been disconnected from other people for tens of thousands of years, such as those in Australia and the residents of the Earth’s remote jungles.

In every human society, there is a belief in supreme power, and it is the same systems of belief that existed in prehistory and the dawn of human Civilization. According to Mircea Eliade, “Holy Experience is one of the foundations in the structure of consciousness.” Eliade calls the new Homo Sapiens “Homo Religiosus” and I agree wholeheartedly.

The alternative circles there are theories that before the end of the last ice period there were advanced Civilizations whose traces were lost in a catalytic event, perhaps the biblical flood, such as Atlantis or Lamuria. Important spiritual teachers such as Peter Dunov in Bulgaria and Rudolf Steiner in Austria argued that there were such Civilizations and that they had advanced technologies, the kind we do not have today.

Dunov argued that Atlantis had a magical mystical language and alphabet that was common to all human races (which reflected in the story of the Babylon tower). This language enabled the Atlantians to transmit spiritual energies. The sacred languages of today, like Hebrew, Aramaic, Sanskrit, originated from this language. He taught his students the language, wrote songs with it and inscribes its symbols in special places on rocks in the Seven Lakes in the Rila Mountains.

According to Dunov, the title Bulgarian comes from the word blago – good (which appears the word blagodarya – thank you), and not as claimed in the tourist books – from a name of a Turkish people who took over the Slavs at the end of the 7th century. Dunov believed that there was an early unknown advanced Civilization in Bulgaria of people that came from bacteria in Central Asia (Pamir Mountains), and these people founded advanced spiritual culture that was called Bulgi or Bulgarian. They had an amazing capability of processing gold and other metals, which they found in the Rhodope Mountains. Indeed, gold treasures from very ancient times were found in Varna and can be seen at the National Museum in Sofia. It is the oldest gold in the world and there is no logical explanation for its presence in this place and time -6000 years ago.

It should be remembered that Plato also claimed that there was an older Athens who disappeared with Atlantis 11,000 years ago. And so, Dunov tells us that the ancient Bulgarian people have set up sacred centers in the Mountains. One of their illuminated teachers was Orpheus, the legendary mythological Lira player, who lived in a much more ancient time then known.

Moreover, Rila Mountains in Bulgaria are one of the most holy places on earth, if not the holiest. The Mountains are very ancient and during Earth’s history were never covered with water, while the rest of Bulgaria’s Mountain ranges were under the sea from time to time, including the nearby Pirin Mountains. Today they are not very high (3,000 meters), but in the past they were much higher.

According to Dunov, Rila Mountains are the oldest home of the human race created in the image of God. Every prophet, teacher, guide, every religion and teaching was aware of them and came to them. Orpheus, the great spirit of the sun, a master and the guide of the Balkan, reached the Rila Mountains in those ancient times and imprinted in the rocks and water of the Seven Lakes the Akashic (energetic) knowledge of the essence of man and his destiny. There are different ways of storing knowledge, one is in crystals or stones, another way is in water that remembers (as Dr. Masaru Emoto from Japan showed in his book “The Hidden Messages in Water”), Orpheus used both.

Even if we do not accept Dunov’s arguments, the big question is how suddenly, out of nowhere, Homo Sapiens appeared? New and advanced type of Hominoid. According to the alternative theories, this happened as a result of external intervention and genetic engineering by people (aliens) that came from other stars. From this point on the human race was guided by illuminated people that taucht the human race the knowledge of agriculture and encouraged them to live in villages and homes instead of tribes and caves.

According to Harry Salman, a Dutch professor close to the “White Brotherhood” and anthroposophy, Atlantis refugees (a continent with advanced Civilization that disappeared in the sea) established centers all over the world, especially in Europe, from where the seeds of new human Civilizations were sewn. During the peak of the ice period – 16,000 years ago, when London covered by a 2,000 meter glacier, the cultural and initiation centers in Italy, Spain and especially in the Balkans worked to formulate and promote the human race. They served several populations: hunters, gatherers, artisans, shepherds, miners and merchants. In the end, all this different populations merged into one human fabric.

[1] where the remains of other types of  ancient were also found, some of them from 1.6 million years ago, which makes them the oldest in Europe