Kukeri – the mask festivals of the Balkans

This is the main event of the winter, held at several times from mid-January until Lent, which begins about seven weeks before Easter (usually the beginning of March). This is a series of mask festivals held all over Bulgaria, thousands of exhibitors and tens and even hundreds of thousands of visitors take part in the festivals. Bulgaria’s Mask Festivals (Kukeri) are an exceptional event recently recognized by UNESCO as a World Heritage Event, and they outshine similar festivals across Europe in authenticity, enthusiasm and interest.

The Kukeri are masked men who wear heavy bell chains and ear muffs around their bodies. In each village a Kukeri ceremony takes place on its own special day. The ceremony begins in the center of the village, from where the Kukeri leave and go from house to house, blessing for health and fertility, and return to the village square, where they jump while dancing the bells enthusiastically. According to their belief, the louder the noise, the more the evil spirits will be scared and run away. Then there is a ceremonial performance followed by a party and dancing.

During the ceremony, the participants present a happy family eating dinner by candlelight, praying and living in harmony, when suddenly they are attacked by the forces of evil, and the Kukeri do everything they can to drive them away. In addition to this, a funny marriage ceremony is performed between a man disguised as a woman and a man disguised as a man, including a so-called sexual act, the woman becoming pregnant and the birth of the baby. The marriage symbolizes the possibility of the fruitfulness of the fields and is a continuation of the sacred marriage tradition of ancient times. In addition, there is a demonstration of plowing and sowing and other agricultural operations, a Kukeri priest blesses the “young couple” and the crowd by sprinkling water on them. 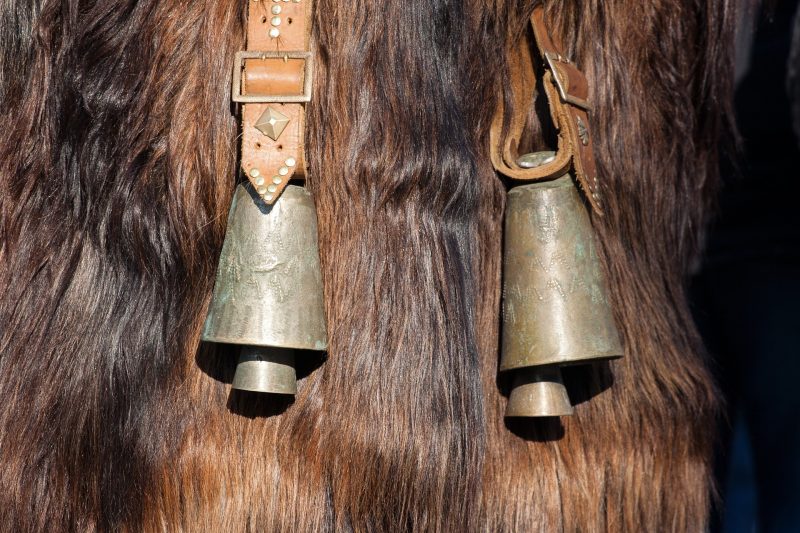 An important figure in these ceremonies is a man disguised as a bear. The bear symbolizes the wild, evil force. He attacks the people and tries to kidnap the baby, but the participants fight him and manage to take him over. Other figures are a horse represented by two people and a king, who is sometimes carried in a chariot.

During the ceremony, blessings are said and there is usually a large group of people participating in it. In addition to the bell-wearing kukeris who show off and dress up, there are musicians (especially drummers and bagpipe players) and dancers. The Kukeri with the bells move with a special step, with the bells on their bodies swinging and thereby symbolizing the full ears of corn moving on the branches. The bells are arranged according to sounds, and the Kukeri usually jump at a certain rhythm, all together, in order to ring the bells, and all the more is fine.

In addition to bells, the costume of the Kukeri also includes scary masks of animals, monsters or grotesque figures that cover the face. Sometimes there are two masks, one in front and one in the back. Above the head, add an addition that enlarges the costume and gives additional volume for the purpose of scaring the demons; Sometimes it’s a pointy hat with sequins, other times a wooden frame with feathers or an elongated hat with furs. The mask of the Kukeri is individual and the wearer prepares it himself for a long time, thus it largely expresses his soul. The rest of the body is covered in costumes of furs and skins, mainly of goat or sheep. The costumes are hung with onions, garlic, corn leaves, herbs, ribbons and shiny plastics and glasses. Horns of ram, bull, lamb and goat are usually attached to the costume. The costumes cover the whole body and head, the wooden frames are covered with furs, feathers, national folklore costumes, and decorated with ribbons (mostly red).

The word Kukeri is of Thracian origin and means tall people in masks. There are many theories about the origin of the masks and what they represent: one of them believes that they are related to the Greek god of wine Dionysus, or more precisely to Dionysus’ accompanying satyrs, who were the model for the Kukeri. Dionysus is the god of festivals and vegetation, but also the mediator between the world of the living and the dead. During the days of the ceremony the spirits and demons, including those of the dead, rise to the surface of the earth and must be returned to their place. 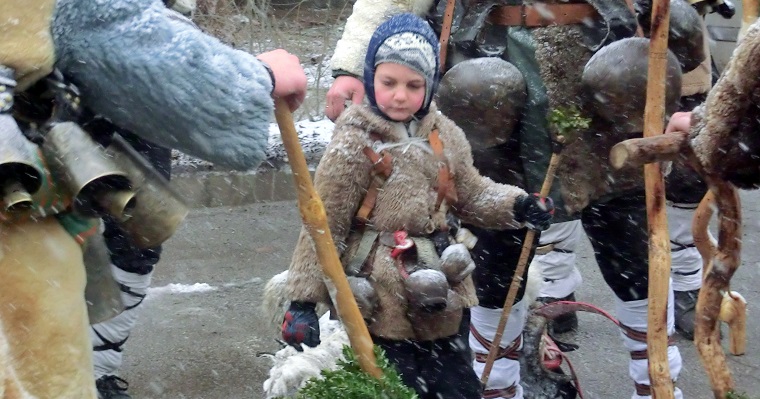 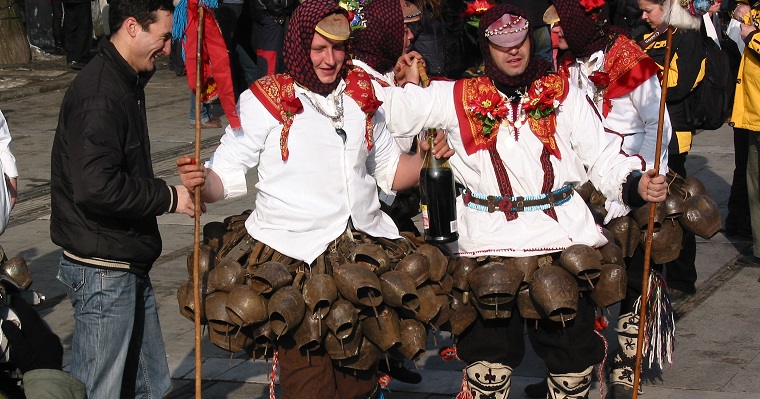